Migrating towards Yarn and Webpack

For the past couple of years, we have been using require.js for module loading and Grunt for automating tasks on front-end, for one out of many projects we have in Wingify. The project has a huge code-base and has many independent components inside it with some shared utilities. Also, there was no concrete build system which could be scaled upon adding new components.

Require.js was being used for good code-structuring, managing modules and their loading. All the different modules were having their own require-config.js file to define rules for a particular module.

Grunt was being used for automating different tasks required to speed up mundane work. We had a number of tasks like the require-amdclean task, concatenating different script / CSS files, minification of files, cache-busting mechanism and so on.

Following are some benefits we were getting from the require-amdclean task:

Everything was working as expected but maintenance, performance, and scale were the issues. We had so many healthy discussions regarding improving things and thus we thought of upgrading our tech stack too. Also, as I mentioned we didn't have a concrete build system; it was the right time to investigate further. We were ready to spend some quality time in researching technologies which could fit in our build system. Gaurav Nanda and I took a break from our daily chores and read many articles/blogs and the not-so-useful official docs to get a good command over various technologies. Migrating from Grunt to Gulp wasn't helping us since build time was nearly the same. The task which took a lot of time was the require-amdclean task, taking around 10 seconds even for adding just a single character like ; while working in the development environment.

Migrating from NPM to Yarn - First step towards a new journey

After reading about Yarn, the team was really curious to play with this yet new package manager aka dependency manager. When we benchmarked the results, we were literally stunned by the time difference between NPM and Yarn in fetching up resources. Yarn achieves this speed by introducing parallelism and its performance and security via maintaining a yarn.lock file.

For a total of 34 packages in total, the following stats would please your eyes too :)

Stats when we did a Fresh Install 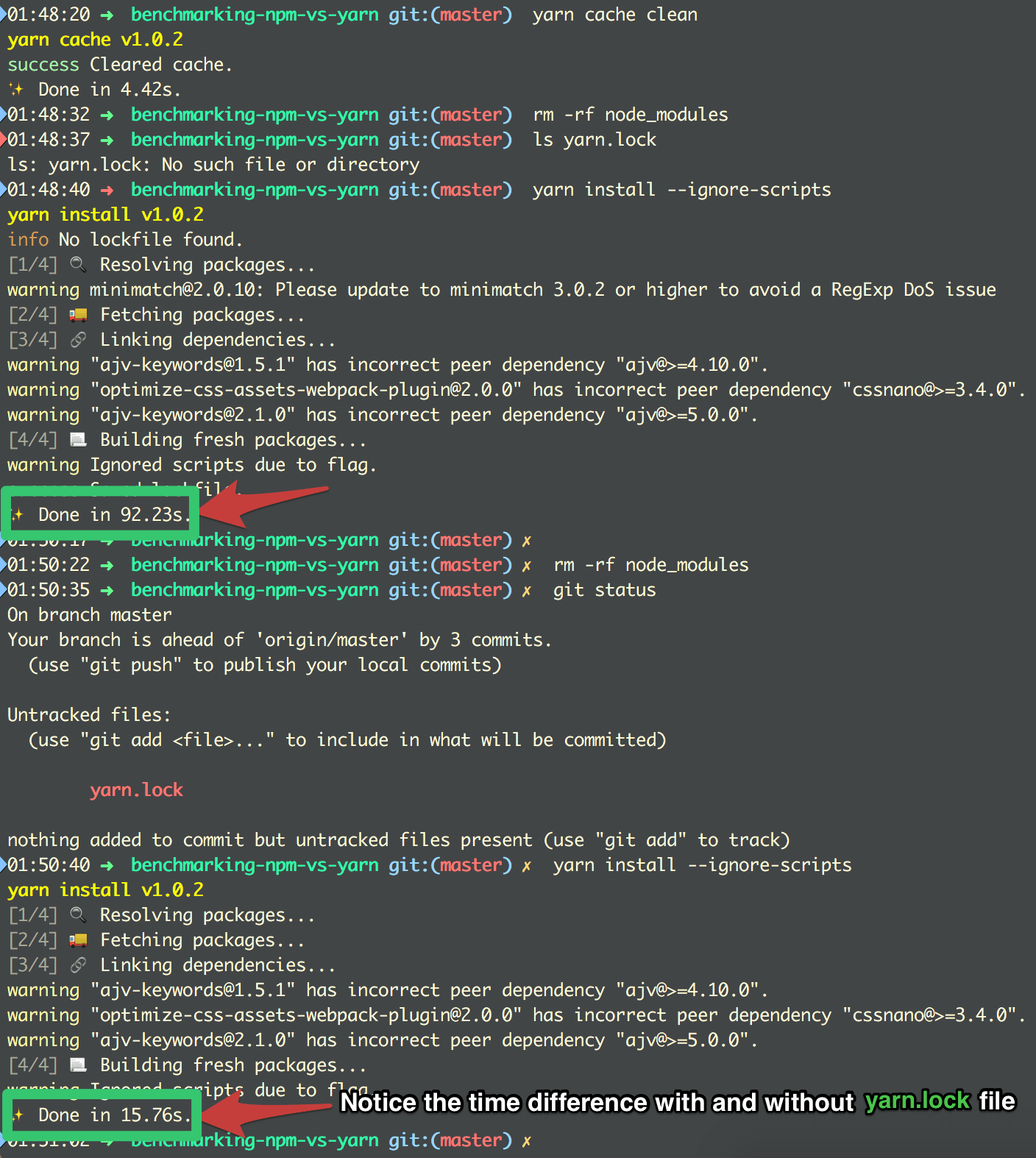 Since we were using bower too, our first step was to port all the dependencies and dev-dependencies listed in our bower.json file to package.json. This was a time-consuming task since we had a huge list of packages. After successful porting of packages and validating the version numbers with the previous packages, we were all set to switch to Yarn. This also helped in keeping just one file for managing packages. We are no longer using bower. Even bower's official site recommends using Yarn and Webpack :)

Why switch to Webpack 2

It wasn't an easy task to accomplish since Webpack is a module bundler rather than a task runner. We were so accustomed to using task runners along with the old-fashioned require.js based module management that it took a good amount of time figuring out how to proceed with our mini-app's new build system.

Apart from the numerous benefits of using Webpack, the most notable features, especially for our codebase and the build system, were:

Converting to Webpack 2 - A transcendent journey ahead

In the beginning, it looked like just porting the require.js configuration to Webpack and we're done. A big NO! This thought was absolutely wrong. There were so many scenarios we had to deal with. We will discuss this in detail as we move along.

First thing first, a clear understanding of what exactly Webpack is and how does it bundle the modules are must. Simply copy-pasting the configuration file from the official website and tweaking it won't help in a long run. One must be very clear regarding the fundamentals on which Webpack is built upon.

Problems which we needed to tackle were:

Check this for knowing the role of each key.

Since we needed to support different modules we had to have different config files for each of our module.

The above configuration is capable of handling n number of modules. Different modules will have at least one bundled JS file as the output. But we also needed to have a bundled CSS file corresponding to each module. So, we decided to have two different config files for every module which has both JS and CSS bundling, one for bundling JS and other for managing assets and bundling CSS files. Tasks like copying files from src to dist, updating the JS file name with a cache-busting hash(prod build) in the index.html file and so on were taken care of inside the assets config file.

The above-mentioned break-down of a module into JS and CSS bundling helped us in having a clean, modular, and scalable approach for our new build system. We also used parallel-webpack to speed up our build by running independent modules in parallel. But be very careful using it, since it spawns a new thread for each different task, which basically uses the different cores of a machine to process. Also, there should be a cap on the number of parallel-tasks to prevent overshooting of CPU usage.

Extraction of common stuff for reusability and maintainability

Let's discuss Webpack module-rules and resolve-aliases which play a significant role, before advancing further with the creation of common webpack-configuration helper methods.

module rules - Create aliases to import or require certain modules more easily. This basically tells how to read a module and to use it.

expose-loader - adds modules to the global object. This is useful for debugging or supporting libraries that depend on libraries in globals.

imports-loader - is useful for third-party modules that rely on global variables like $ or this being the window object. The imports loader can add the necessary require('whatever') calls, so those modules work with Webpack.

This is an obvious thing that we had same third-party libraries, wrappers over external libraries, and self-baked useful utilities shared across different modules. This means that our module-specific webpack config file would have the same set of repeated rules and aliases. Code duplication might seem a good fit here for readability but is really painful to maintain in a long run.

Let's discuss how we managed to share the common module rules and resolve aliases across the different modules.

Here's a list of common rules and aliases defined explicitly in a separate file.

We now had a common file where we could easily add/update/remove any rule and its corresponding alias. Now we needed to have a utility which combines the common rules and aliases with the already defined rules and aliases in a particular modules' config file.

Time to write our module specific config file. We'll demonstrate just one config file i.e. for moduleA and the others would look exactly the same except the options' value as per module.

This is a complete webpack config file for bundling JS file for moduleA. While configuring it, we defined different options, each one has its own purpose. To know more about each option, please refer this.

Webpack enables the use of loaders to preprocess files. This allows us to bundle any static resource way beyond JavaScript.

We introduced two loaders for bundling JS resources inside our app.

Since we needed these two loaders for all our modules, we defined them in the same file we discussed earlier - rulesAndAliasUtil.js

And updating the method: mergeRulesAndUpdate as follows

This was all about bundling of JS modules. The same approach was followed for different modules. Now we were left with the bundling of our CSS files and the obvious chores like copying, replacing, etc.

We are using ExtractTextPlugin, which extracts text from a bundle, or bundles, into a separate file, along with css-loader

We faced a very weird issue and thus worth mentioning here explicitly. ExtractTextPlugin tries to process URL like in background-image, url(), etc. We need to stop that behavior so we need to set url:false inside the options like:

Few more plugins that we are using are:

This was all about bundling of CSS file.

First, we created a file to read arguments that could be read in our webpack.config.js file via a package.json script.

We tweaked our main webpack.config.js to make it module-aware.

In our package.json file, we created different scripts for running either a development build or production-ready build(minification, cache-busting, and purification) and either to run build for all modules or for just selective modules.

According to Sean T. Larkin in the release blog post: "webpack 3: Official Release!!", migrating from webpack 2 to 3 should involve no effort beyond running the upgrade commands in your terminal. We are using [email protected] and [email protected] now :)

Last but not the least - Stepping towards a long journey

This was just the beginning of stepping towards researching different technologies and upgrading our tech stack. We have now gradually started writing ES6 code for that particular project. The experience was tremendous and the team is now working on evaluating other sections where the change could gradually take a form.

Should you have any feedback regarding this article, please share your thoughts via comments.